Arizona is a geologically diverse state of mountains, canyons, river valleys and mesas. As most interstate highways span desert regions, road travellers sometimes wrongly assume the whole state is one vast, arid wasteland. Overall, Arizona has a ton of wide open land, amazing vistas and fairly friendly people. To see the best of Arizona, though, you will need to travel the smaller, scenic highways.

About 50% of the state is covered with Indian reservation and the other 50% covered in senior citizens.

It is legal to hitchhike in Arizona while off the travelled portion of a roadway. Stay on the berm of the highway, and you should be fine.

28-796. Pedestrian on roadways C. A person shall not stand in a roadway for the purpose of soliciting a ride from the driver of a vehicle.

22. "Roadway" means that portion of a highway that is improved, designed or ordinarily used for vehicular travel, exclusive of the berm or shoulder.

In city areas (Phoenix, Tucson, Tempe) and some regions patrolled by the Sheriffs office (most small towns) you may be hassled. Always have identification at the ready and be respectful if you expect to keep moving.

Note:All land regulated by the National Park service prohibits hitchhiking under the Code of Federal Regulations Title 36 section 4.31: Hitchhiking or soliciting transportation is prohibited except in designated areas and under conditions established by the superintendent.

Arizona has not made public the compendiums for any other NP administrative land, so we might assume it is prohibited on all of them.

Interstate Highway 10 (I-10) through Arizona begins at the Colorado River bordering California and passes through Phoenix, the state's largest city, before veering south into Tucson and then eastward to the New Mexico border. When hitchhiking this route between April through October, be prepared with sun cover (hat and long-sleeved, lightweight cotton clothes) and plenty of water. The temperatures can potentially reach over 100 degrees Fahrenheit during any day of these months. In late July through August, temperatures can soar over 120 degrees in some regions.

Interstate Highway 40 (I-40) begins at the Colorado River west of Kingman and climbs to 7000 feet elevation to the mountain towns of Williams and Flagstaff. I-40 then descends through Winslow and Holbrook before entering Navajo Nation en route to the New Mexico border. Sites and detours along the way include Grand Canyon National Park (exit 165 to Route 64 North), downtown Flagstaff for friendly locals and kindred travellers (exit 195 and head north along Milton Rd to Route 66) and Petrified Forest National Park (Exit 311, be prepared to hike in). Meteor Crater in Winslow is not worth the visit. It is privately owned and you must pay $15 to see the crater, as it is surrounded by a fence set back from the rim. Keep in mind that it is illegal to hitchhike within national parks, so thumb a ride before the toll booths.

Interstate Highway 17 (I-17) begins in Phoenix and ends in Flagstaff. Hitchhiking out of Phoenix means getting out of the large suburb area that continues to sprawl further northward. Local bus service will take you near the outer 101 Loop for $1.25, but you may still have trouble hitchhiking until you get to the Carefree Highway further north, about 10 miles past the 101. Carefree has a wide on-ramp, and this hitchhiker has had short waits and no cop hassle there. As with all interstate highways, it is illegal to hitchhike from the actual shoulder of the road. In Phoenix area and especially Camp Verde, along the I-17 route, state highway patrol or local cops may give you a ticket if they catch you on the shoulder. Stick to one of the three main on-ramps in town to get further. If heading to Sedona, take Exit 298 to State Route 179. You may wait a little while for a ride, but this is a direct route and most drivers will be going all the way into town.

Interstate Highway 19 (I-19) dives due south from Tucson, to the Mexico border at Nogales. Mexican-Americans have been much more likely to pick up hitchhikers in Arizona, and many travel this route. Expect a through-ride to the border, if going that far. 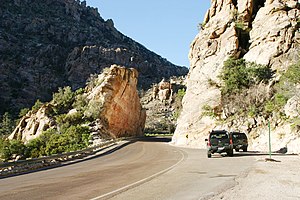 To see the best of Arizona, get off the main highways! Routes include:

State Routes 89 and 89A through Sedona, Prescott, Flagstaff, Navajo Nation and ending in Page at Lake Powell.

State Route 87 northeast of Phoenix runs along the Mogollon Rim near Payson.

State Route 260 connects with 87 at Payson, heading east into pine tree-filled mountains, hills and valleys, with small towns like Heber and Show Low along the route. Winter skiing is further east at Pinetop resort near Springerville.

State Route 80, heading south from Benson goes through the historic town of Tombstone, where gunslingers with blanks entertain tourists along the main drag. Worth the stop for a free visit to Boot Hill cemetery and a swig at the saloon. South from Tombstone is Bisbee, along Route 90. Once a mining town, Bisbee now has a thriving artists community and growing music scene. Check out the Blues festival in September and a very happening celebration at New Year's.

Over the last 10 years there has been a huge influx of new residents from big California cities to the small (and once super-affordable) towns of Arizona. As a result you will find many of these new residents to be more suspicious and less friendly than the true Arizona local. You may wait a little longer for a ride in the state than some neighboring regions like Utah, Colorado and New Mexico, but hang in there-- keep your thumb up and a smile on your face and the ride will come!

Arizonans are used to seeing transients and are entirely unamused by you. Businesses are intolerant of hitchhiker activities, such as asking for a marker to make a sign, or asking for rides at gas stations. Many libraries charge a fee to use the computer. A subway restaurant in Phoenix would not let me use more than 2 napkins with my meal!! I assure you the locals are absolutely the stingiest and most unfriendly in the entire country. Catching rides is not prohibitively difficult here (although I was trapped at a truck stop for 3 days once) and there are many beautiful places in the backcountry to explore; it is a bummer the people are so spiteful. I cannot recommend going out of your way to visit Arizona. Thewindandrain (talk) 23:22, 1 June 2013 (CEST)