From Hitchwiki
Jump to navigation Jump to search
The idea of making my own backpack has come back to my mind every time I got disappointed by a new pack that I had my hopes on for either a painless trip or a simple but good enough design that could fit my stuff and make it easily available.

Making it was not difficult at all, the only tricky thing is to find stuff that matched the vague ideas I had of how I wanted it to be. Little by little stuff was found and here it is.

Total cost of project was around 3 euros. 2 euros where unnecessary as later on I found out where the military base dumpster was, where I could have found the same backpack that was sold to me for a symbolic price. I bought screws because I was in a hurry to work and didn't had any, but 10 screws are easy to find or ask for. All this means you can have a fully custom and better than any other backpack for free if you are patient enough or know where to look for materials. 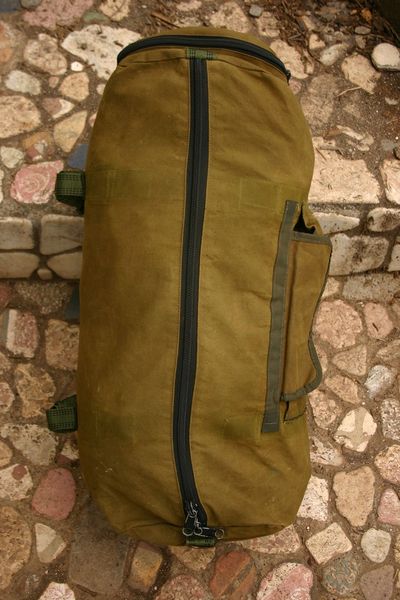 Although I started sewing a very similar design, I came across a hand bag that was exactly what I was hand sewing, or even better as it had a strong zipper and weather-proof and strong material, something that my previous design lacked entirely.

A vertical zipper is something that I always missed on any backpack except the one that had it but was too big, shiny and complicated to keep. This makes it easy to access any thing stored inside in a matter of seconds, Without having to touch or remove any other thing as you normally would by accessing your stuff from the top opening of a backpack. What I do now when I want something from the backpack is to lay it down on the floor, open the zipper either completely or just where the stuff is (if has a double zipper opener), get the thing and close it.

The hand bag had lots of unnecessary tapes, brands and things sewed all around that made it look fancy, but since it added weight and complexity I remove them all leaving a clean green bag with only two tapes on the side that now work to hold anything that wont fit inside or that I want to have readily available at any time (like mattress, rain coat, warm clothes, etc). Also two outside pockets where left for obvious convenience reasons. The horizontal zipper at the top is a medium size pocket which is very useful.

The pack measurements are based on my body, and that is around 60 cm height by around 40 cm width, more or less when its fully packed. 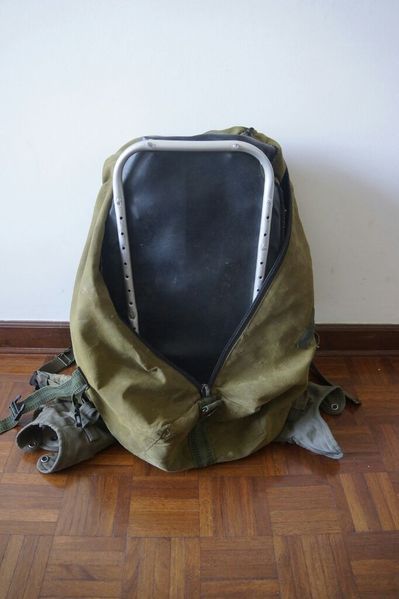 The aluminum frame belonged to a retired backpack that was being disposed by a friend. The frame was placed on the inside of the hand bag and punching holes every couple centimeters that helped me attach the rest of the backpack features with screws. Because of many trial and error, or because I tried many different design's, the frame has more holes than needed in the final design.

If you don't find a backpack ready made frame, grab an aluminum pole (like the ones used for floor sweepers) and carefully bend it into the shape you need.

One detail is that an internal frame is not really necessary, specially if you are not planning to carry lots of weight and / or you know how to pack things properly (heaviest stuff in the bottom) 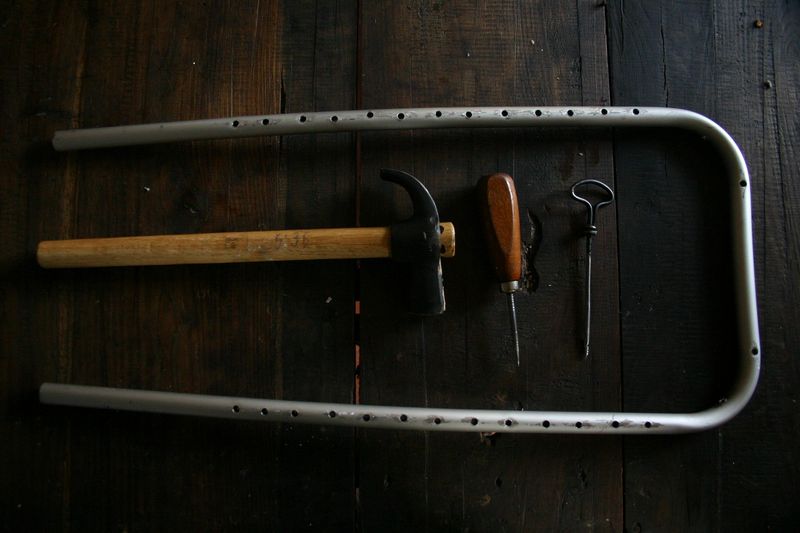 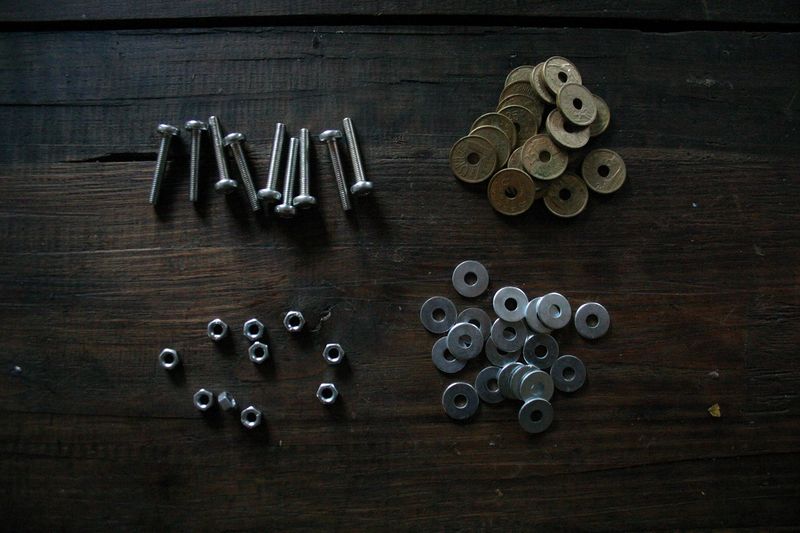 I didn't sewed anything in the end, instead I used screws and packing rings (if you run out, use coins or tokens if you have) to keep it fixed. About screwing instead of sewing, Ive been forcing this backpack for a while and I believe stitches would have started to break by now but screws are as if nothing had happened. Also, screws are a much more traveler friendly fix if it breaks, I carry with me a multitool, extra screws and threads \ needless with which I'm capable of fixing the pack entirely in case of emergency. 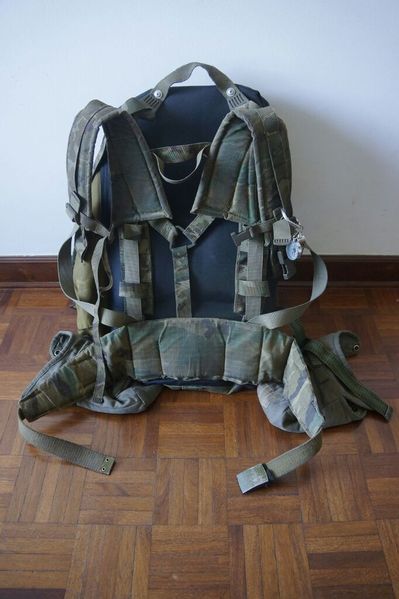 In a previous backpack, the backpack had an outer frame and a basic strap system. After deciding that it was pointless to make it so complicated for myself, I decided to grab an old military backpack that I got for 2 euros and that was not worth using at all (it was impossible to wear the right way unless you carry 50 kilos or something), next step was to take apart the whole strap system and adapt it to mine. The result was a totally different way of putting it all together but ended up working wonders. The strap system allows me to adjust it as with any good backpack, or even better since there is no sewing, I can unscrew stuff and customize as I need.

Most of the screws are hidden, mainly because I could but also to avoid contact with my back. 10 screws where used in total, 5 on each side, with 3 packing rings each between any part the screw is going through (frame, bag and strap system).

The hip belt was improved by replacing the adjusting strap with a regular belt for quicker fastening. Also two canteen bags where added to the belt for extra stuff. 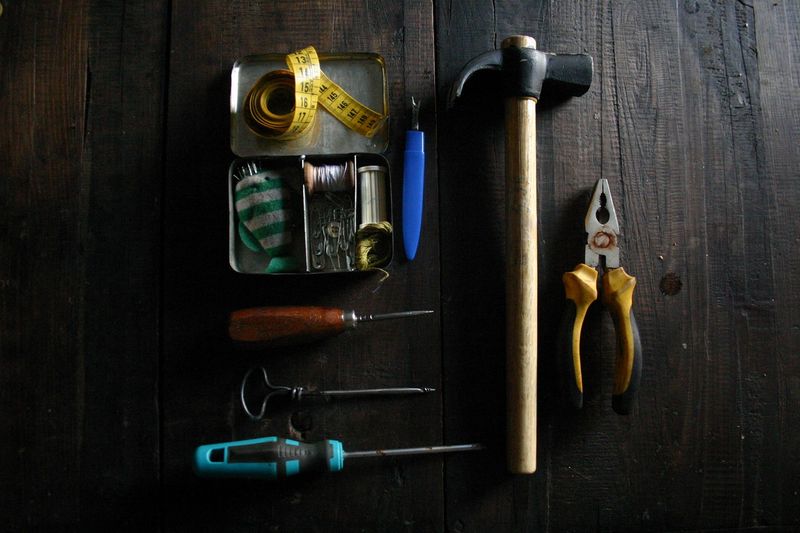 All tools used for making the Linyera Backpack. 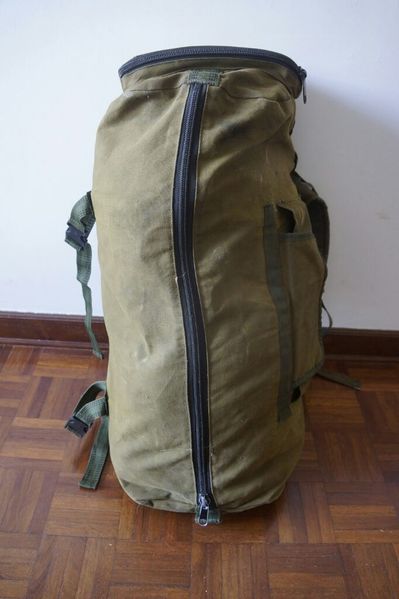 Looking a bit beaten up after a long successful trip where it was stressed to no limits. For this picture I filled it up randomly with stuff with no special care, hence the way it looks. 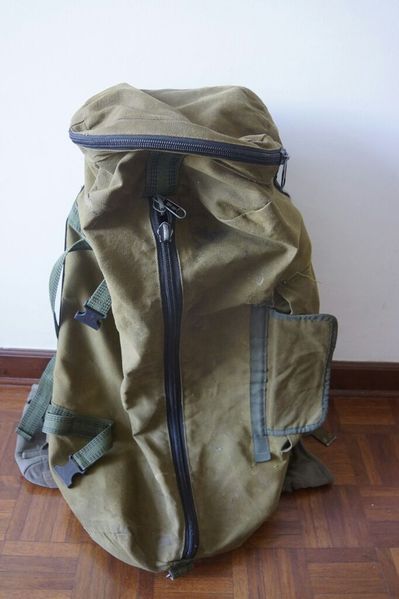