Erin has been hitchhiking for almost half her life. Countries she's hitched in include the USA, Canada, Mexico, New Zealand, Ireland, the UK, Iceland, Sweden, Norway, Denmark, Finland, Portugal, and French Polynesia, though the list grows exponentially every year - she didn't get a passport until she was 28.

Most of her hitchhiking trips have been conducted solo. Though she enjoys the companionship of other hitchhikers, she's found that she travels much slower with a male in tow and that most females are averse to the idea of hitchhiking, sadly. She has developed a few superstitions, and almost always hitchhikes with a hat/bandanna or some other sort of headgear. Recently, she has begun carrying a laminated image of Saint Patrick with her, since he is the patron saint of travelers. Raised Catholic, she generally doesn't believe in such things, but it's a cool picture with lots of snakes in it, so why not?

She's made many observations over the years regarding the demographics of her rides' cars and trucks, and regrets that this sometimes results in profiling. She doesn't mean to harbor vehicular prejudices, it's just that she's noticed only one or two of her thousands of rides have been from minivans or RVs. She tends to turn up the charm, conversely, when she notices a colorful Volkswagen "bus" approaching.

When not hitchhiking she often lives in the San Francisco Bay Area, which she's been cursing & vowing to leave for years. It's never really felt like home, she just sort of ended up there & has a hard time leaving for very long because of various people & things that tether her to the region, including her very flexible & accomodating if far from lucrative job. She's embarrassed by the fact that she's spent most of her adult life in a place she doesn't love, as it contrasts with so many things about who she is, but consoles herself by leaving as often as possible & wasting a lot of time looking at cheap real estate in the Upper Peninsula of Michigan, which none of her partners have ever come close to entertaining the idea of moving to. (She regrets that she's been more or less forced to choose between celibacy & relative geographic isolation, but there it is - and her romantic side has always won out, darn it.)

Erin frequently posts photos from her hitchhiking trips to her Instagram & Tumblr accounts, & occasionally to Flickr. She also tweets, though not usually about hitchhiking. She's currently working on compiling a book-form anthology of writing by female hitchhikers, and invites submissions. When she can't travel, she enjoys devouring outdated Lonely Planet guides for places she's never had a chance to visit & planning theoretical trips, reading others' words on place (Paul Theroux, Bruce Chatwin, Rebecca Solnit), & receiving postcards from far-flung friends and strangers.

Erin is featured in a film about a hitchhiking journey to Nordkapp, which was made by Dara Moroney in 2011. It can be viewed here: 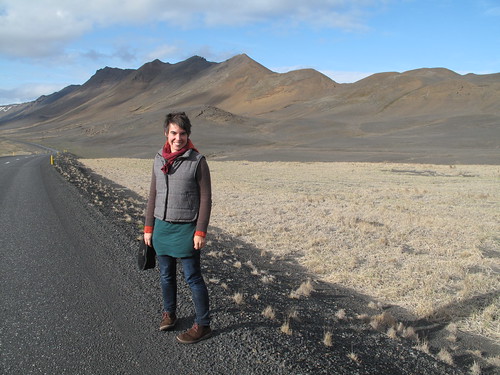