The Irkeshtam pass is a border crossing between Kyrgyzstan and China. It is located near the small village of Irkeshtam in Kyrgyzstan and forms the end of European Route 60 (E60). The border to China is the second important border crossing from Kyrgyzstan to China. The pass is approached from the city of Osh via Sary Tash on the Kyrgyz side and, on the Chinese side, from Kashgar via Ulugqat in the Xinjiang province. 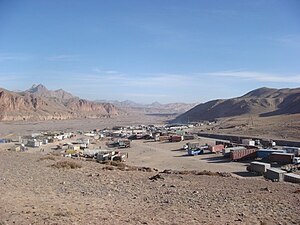 Road conditions on the Kyrgyz side are pretty good as long it's not snowing. On the Chinese side, however, parts of the road are very bad, but road construction is ongoing as of November 2011. It is not allowed for Kyrgyz cars to cross the border, so you have to change to a Chinese vehicle at the border. The border crossing is open only during the day and it is closed on weekends and holidays. Crossing the border can take anything between 1 and 3 hours, so you better be early.

From Kashgar, Bus number 2 heading north will take you a bit out of the city on the right road. Catch a car or truck, get to the intersection of road 309. There are many small villages on the way, after some 40 km you will reach the intersection of Irkeshtam and Tourgart pass. Make it to Ugomchat, !!IMPORTANT!! The imigration office has moved from the border to Ugomchat, you will need to get your EXIT stamp there. However the Immigration is well hidden and not signposted, about 3 km from the town. A local car might just pass it and you will arrive 7 hours later at the border told that you have to go back! (Yes really). After you have passed Ugomchat city, keep looking to your right as you head out on the outskirts, and you will see a large, official looking building. This is the place. lukeyboy95 was told by immigration that hitching a ride here was illegal, and not allowed (May 2013). After a night of protesting and camping outside they're flashy building, the next morning they reluctantly granted permission for me. So be careful, a taxi is $65. If you get further info here, update this section. 5-8 hours truck drive to the border. Border closed weekends. Closes early, at 6 - 6:30 Beijing time. At border Chinese side there is some kind of accomodation, but also possibility to find abandoned room where you can sleep. The border opens at 11 am beijing time. Guards will get you on a truck across to Kyrgyz side. In Winter, this can be very cold. Wrap up.

From Sary-Tash, just walk to the road leading to Irkeshtam and hitch. Most trucks will pick up hitchhikers, but some of them may also demand money. The usual fare seems to be 300 som or US5–10.

The border seems to close at 2 pm kyrgyz time. If you arrive too late and it's too cold for camping, you can stay with the locals in Irkeshtam for 100 Som.

There are actually two border posts on the Chinese side. One is 5 Km after the Kyrgyz post, where Chinese border police inspects luggage and passport and requests confirmation of onward transport. At a second post, around 120 km later, bags will be scanned once again and passports will be finally stamped.

August 2014 - Hitchhikers report that the Chinese police is enforcing paid taxis between both border posts on inpendent travellers. They take your passport and do not want to return until transport is arranged with a chinese driver. Rovingsnails and other hitchhikers were taken their passports and threatened to be deported back to Kyrgyzstan unless transport was arranged in between both border posts. Police would not accept trucks as valid transport and the taxi between both borders costs 400 Yuan ($64) for 4 people. They did not get the chance to wait and check what the police would do with hitchhikers who need Kyrgyz visa (and therefore cannot be deported) and have no cash whatsoever, as two travellers to Kashgar invited them for a ride between the borders. It all looks like an organised trick between police and taxi drivers, and as user lukeyboy95 says above they may end up giving up on you and find you free transport, but perseverance might be needed (and make sure you are not tight with visa deadlines).