Liège (Dutch: Luik; German: Lüttich) is a city in the French speaking part of Belgium.

Hitching away from Liège is said to be difficult, because of the so-called Spaghetti Motorway system. On the other hand it is not impossible to get lifts along the former transit-route of the E25 straight through the city of Liege alongside the Maas-river. Provided you are familiar which used to be the pre-motorway era transit route you can quite successfully hitch out of Liege along that transit route using a sign Lux (embourg) or Arlon heading towards the Ardennes, or a sign Vise, Maastr (icht) or NL heading north. The transit route, not marked anymore by signs "transit" these days, remains the fastest way to get through Liege by car during most of the time. 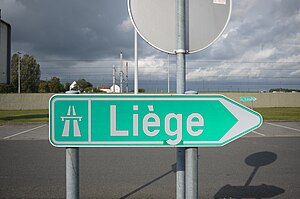 Get bus 66 (direction Herstal) from the main train station. Get off in an industrial estate beside the motorway. Near here there is a motorway exit for traffic going towards Maastricht, etc. This access lane next to the bridge Pont de l'Atlas, about 700 meter from Liege-Bressoux train station. Best to use a sign Maastr. or NL or simply a lot of self confidence ;)

Go the "Luxembourg" sign after the roundabout near the Angleur train station in the very south of Liege city. There appears to be a bus service to and from this area. Here you will find an area for a car to pull over before the motorway rush begins.

Alternatively you can take the bus 65 and go down at the bus stop Chênée. There you will have to walk 500 m until the traffic light, just before the entrance of the motorway.

There are some fairly average on-ramps to the E25/A602 within walking distance of the city centre. Tom tried the on-ramp on Rue St. Laurent, which worked fine for him. The on-ramp on Jardin Jean-Bernard Lejeune looks like another good option.

Ask the driver to take you to the first service station on the road you are taking.

The CSOA Passe-partout, an "occupied social center" (or squat) in the city center, proposes several activites such as :

You pay what you want, but please pay anyway.

The Oxfam Solidarity program provides several shops in the city center. Have a look at the web site for more informations.

There is an hostel in the Outremeuse district, l'Auberge Georges Simenon. You can easily fine some Couchsurfer hosts. Just have a look on the website, there is plenty of them.

A cheap supermarket, Colruyt, can be found on the Boulevard de la Constitution.

Although most shops are closed on sunday, the local market takes place on the Quai de la Batte, all along the river. There you can find everything you may need. A good place for dumpster diving as well. Some supermarkets are still open, but they might not be the cheapest ones...

While the station Liège-Guillemins has a free Wi-Fi access, the pub Le Pot au Lait provides a free access to a computer for the customers (but nobody will ask you to order something before using it). It might also be a good place to remember whenever you're looking for free toilets.

In the district called "Le Carré", there is plenty of pubs open until the late morning. The entrance is usually free. But if you're looking for something more alternative, you should have a look at the entrance of the association called "Aquilone", Boulevard de Saucy. There are a lot of flyers and posters to advertise the upcoming events of the underground scene of the city.

You can go to the regional bus company website, which provides you the schedule for each bus all around the country.

Blackriding is quite difficult. Each passenger is supposed to show his ticket to the driver when going on board, and regular routine controls are conducted. Although, the bus drivers are often in a hurry, and won't always actually look at your ticket if you're showing it by yourself. This is especially true during the rush hours. A good compromise is the one day ticket, which cost 3.00 € and allows you to use all the busses in the urban area (delimitations are showned on bus stops panels). The company's little stores near the main bus stops (Saint Lambert, Gare Léopold, Pont d'Avroy) as well as the offices (i.e. in the main train station)

The main train station is Liège-Guillemins (busses #1, #4, and many others). The province is well desserved by the SNCB/NMBS, but recent budget cuts may change this situation. Ticket controls are not systematics on regional lines, but keep in mind that the fine may be up to 150 €.

Landscape. You can see the main train station (Liège-Guillemins) on the left, while still being builded.
Retrieved from "https://en.hitchwiki.org/en/index.php?title=Liège&oldid=70990"
Categories: