Mexico is a country in North America. Despite its notoriety, hitchhiking in Mexico is not only possible but it can be a rather enjoyable experience. Due to its sheer size it´s impossible to give a general hitchability rating for this country: the experiences vary from state to state. As anywhere, you can go fast on highways and very slow on small roads.

You can catch long rides at the gas stations (gasolineras) and at the exits of the cities when you travel on the highways. On the small roads, however, hitchhiking can sometimes be time-taking - waits and walks of 2-3 hours are not unheard of. Be prepared with patience, water and sun cream. Although in many places locals hitch to get home from the grocery store for instance, hitchhiking as a lifestyle or as a means of long-distance travel is not so common in Mexico and not everybody might immediately understand what you want. So, on the mountain paths for instance, your brain should be wired more to enjoy the magnificent views and eating the abundance of fruit the nature has on offer rather than making a lot of progress.

You can hitchhike pretty much everywhere, even on the highway (although pretty much no one stops at such high speeds). In general, asking on the gas station or even traffic lights can get you further pretty easily. You can also thumb up at the various border control and military checkpoints (just ask the personnel for permission beforehand).

The best place to get a ride is not on the side of the road or an on-ramp, like in many other countries, but at petrol stations or exits from shopping centers, in truck stops or at the restaurants where truckers eat. Some petrol stations in the north don't allow people to do that, but you can try to speak with the manager. It works sometimes. Otherwise, just stay by the cashier of the petrol station or at the door (they can't forbid you that) and ask. Nevertheless if you don't ask people and stick out your thumb you can still make good distance.

However, if you're in an area with a lot of local traffic, it might be useful to make a sign that says "Siguiente Gasolinera" (next gas station). Then you can get a ride to a better hitchhiking spot.

Mexican license plates are very easy to interpret: The name of the issuing federal state is written on them (as you will easily notice once in the country). When travelling longer distances or in central Mexico with its many small states it can therefore be useful knowing which state your destination is in (if you have one). 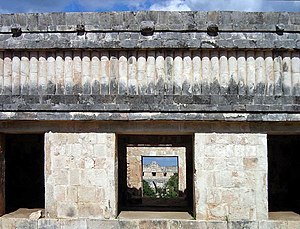 When traveling long distances with no specific plan, it becomes difficult to arrange shelter through hospitality networks. Also, in many small towns few people have access to the internet. Luckily, it's really easy and safe to stay over in gas stations or fire stations. If you get stuck on the road at night, you can ask to be dropped off at any PEMEX (the only gasoline company of Mexico). If you talk directly to the people in charge, they will tell you what's the safest spot to sleep at. Many gas stations also have free showers and you don't need to be a truck driver to use them. When you're inside of a town, it's better to go to the fire station. The firemen are very friendly and they are used to host broke travelers from exotic places.

If you're traveling through the West Coast it might be difficult to find a free camping site at the popular beaches. However, almost every beach town has a turtle camp where you can camp for free. You might be asked to do some work in exchange, like counting and liberating baby turtles!!!

It is even less recommendable than in other countries to take drugs or weapons with you, especially as of 2010 since the Mexican government, backed by the US ADA who are actually present in Mexico (!!) have decided to crack down on narco and weapon trafficking. Therefore you likely will be checked at one of the numerous check points, especially in the north as you near the US border. But it's also good to know that the soldiers hardly ever search all the way through a large back-pack, unless you answer their questions really bad. If the vehicle you're riding in does get stopped just stay calm, show your passport, say the magic words "turista" ("tourist") and "de paseo nada más" ("just passing"), and if they ask to see your stuff open you bag and show them that it's all clothes and stuff.

The small less trafficky roads, in the mountains and in Chiapas for instance, can test your patience. If you are coming from south (Guatemala) people might be afraid to pick you up because there are so many checkpoints."--Astikain (talk) 15:59, 4 June 2013 (CEST)