Note that this website is mainly about hitchhiking, another free form of transport, which is much more legal and especially more safe.

Freight hopping became a common means of transportation in the United States following the American Civil War as the railroads began pushing westward, especially among migrant workers who became known as hobos. It continued to be widely used by the destitute and those unable to afford other transportation, especially during times of widespread economic dislocation such as the Great Depression.

In more recent times, freight hopping has evolved into an underground movement of hobos, bums, tramps, punks and anarchists, or just a poor lonesome traveler with no money. These people can be found throughout the United States, hanging out in 'Jungles' by the side of the tracks or near a freight yard.

Riding the rails, hoboing, or jumping a freight train (train-hopping), although most commonly found in the United States, can be done in most parts of the world. If there are freight trains, then there can be hobos. While there is a vast amount of information online regarding the U.S., practical guides for Europe, Asia and Oceania are few and far between. A zine called 'EuroHobo' exists for European adventures but can be difficult to obtain.

Your best option for outside of the U.S. is to find your nearest train yard and spend some good long hours waiting and watching. Keep an eye out for the different types of cars, what looks rideable, what doesn't, and keep track of the timetables and frequencies. Hoboing can be fun, exciting and full of adventure, but it also takes a lot of time and patience. Research of the area is vital beforehand, but also while sitting by the tracks in the cold dark night, the wind and rain blowing into your face. You'll need passion and an adventurous spirit to keep you there, but once you find your ride, you will be heavily rewarded.

A big country with an extensive rail-network, coupled with a history of hobo traveling, makes the United States the ideal place for riding the rails.

Although riding trains for free (train-hopping) is illegal, it is one of the most viable ways to get out of the city for free. In most passenger trains (NJ Transit, Amtrak, etc.), generally speaking, if you are discovered to be riding without paying the proper fare, you will be asked to pay it. If you can not pay it, then you will be asked to exit the train at the next station. As long as you remain friendly and cooperative, there should not be a problem with legal issues, arrest, or fines.

Hopping freight trains is a more dangerous, but a more exciting way to ride long distances for free, in the United States. It is more common here than in any other part of the world, and hoboing has a long history in art, music and culture. It is extremely practical to do if you have phone or internet access, because there are numbers and/or websites that will give you the direction that each freight is headed and its estimated time of arrival, based on that freight's identification number.

A common accessory is a two-way radio, used to listen in on freight movements, destinations and times of departure. Frequencies will need to be found before hand. It is very possible to ride without one, which will save you space and weight (radio, batteries, recharges), but a little more time might be needed to work out which trains are going where and when they're looking like leaving.

If possible get your hands on the Crew Change Guide, an underground book with hopping info on nearly every crew changing station across the United States. 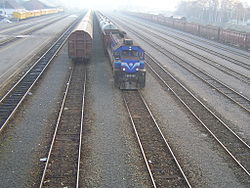 Freight trains can be found in most European Countries and often carry rideable cars. Auto Racks (automobile carriers), Boxcars, Coil Cars, Flat Cars, Grainers, Gondolas, Tanker Cars, and Well Cars can all be found. Most are electric, traveling far and fast. Which is fortunate since very long tunnels are found in Europe, and diesel trains going through tunnels require a 'skank' or piece of material which you must dampen and tie around your mouth and nose to avoid asphyxiation.

Conductors, controllers and engineers or rail workers have no concept of 'hoboing' in Europe, so be prepared to have a good explanation if you get caught. All yard workers wear bright vests, so you can see them from a distance, however this also means a moving body without a vest is likely to raise attention. Keep low, stay safe. 'Bulls' or railroad police don't exist (I don't agree with this, for example in Slovakia they do exist. ) in Europe so you're off the hook there. A huge country with big distances between cities, lots of rails and trains, no bulls, little security... sound like hobo heaven? It is! Well, almost. There's little information to be found about times, destinations and yards, so several hours will have to be spent scouting out the system and your nearest rail network. Different gauges are used for different states, which means certain trains can only operate within their state. Pacific National runs through most of the country, with routes to and from Brisbane, Sydney, Melbourne, Adelaide and Perth. QLD RAIL covers Queensland and for hopping out of Brisbane, the Southbound yard can be found at Acacia Ridge, while for Northbound trains Bowen Hills is your best bet. Tasmania has its own rail network, going from Hobart up through the middle of the island. Note there is no rail service to Tasmania!

This article is partly based on work from Wikipedia.