Trieste is a city in the very east of Italy. 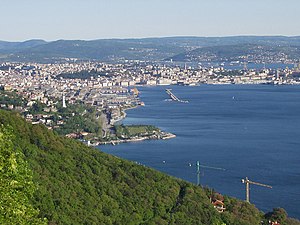 Center of Trieste from the North

Most traffic going to Rijeka is passing a small village called Basovizza. You can take the bus #39 to get there. The bus starts at the main rail station inside the city, passing the university, then uphill. When the bus is leaving the main road, then it is the right time to get out. Go back to the road and start hitchhiking from there. It's an average place there, because it is behind a curve, but you will be seen soon enough to get away.

If you can get a short ride of about 5km to the former border with Slovenia, take it. There is a small petrol station and some restaurants, drivers have a better opportunity to stop here, so, you can stand next to the main road and tramp or talk with the people who stop to take gas.

Take a tram, bus 2 or 42 to Opicina , which is a town almost at the border. The main village road becomes the road to the border, getting out of town there are places where vehicles can stop. Recommended place is in front of NLB bank at the end of the town and where cars can stop easily. Just after the border there is a gas station on the motorway, or you can stand by the old road.

Or bus to Sežana anda walk down a little through the city until you see the signal of Ljubljana. You'd better hitch hike before getting in the the highway

Take a bus that goes to Aquilinia, for example bus #20 departing from the city centre, direction Muggia. Get off at the first stop in Aquilinia, which is more or less the first stop after passing an industrial district. Walk towards the second stop (if you aren't already there). The second stop is located right after a traffic light and a zebra crossing. In front of you you will see a blue sign which encourages drivers to slow down. A couple of hundred meters further the roads splits, one can either enter the motorway or drive towards Muggia. Probably good to have a sign Koper].

Your best option is to get to a Area Servizio rest stop petrol station on the motorway. The easiest way to do that is to take bus line G51 from Trieste bus station (around 3 Euro). Bus G51 leaves once every half hour and stops inside the bus station building instead of outside with the other busses. Get out some 30 minutes later after the village of Sistiana in front of the big supermarket "Conad superstore" in Duino. Keep walking in the same direction the bus is going for about 400 meters, you'll see a sign saying "Idea hotel" and a large fenced in slab of asphalt. Follow the path right here until you reach a small metal gate leading to a gas station on the statal road. The back of this gas station is connected with the rest area on the highway, direction Slovenia. To go direction Venice, just use the underground tunnel connecting the two rest areas. This spot seems to be most active during the morning and early afternoon, but even then there doesn't seem to be too much traffic, and most people were going to Monfalcone 15 minutes up the road. People seemed pretty friendly here, and we managed to get a ride in about 30 minutes. We also tried this spot the previous evening and it was completely desolate apart from a few police cars stopping to get dinner at the "Fast Eat Italy".

Option 2 Bus #36 from the center of Trieste. It follows the road along the coast and this road (Viale Miramare) is the one leading to the motorway. Get out of the bus at the stop before the last one. There's no ideal spot on this road but if you walk a bit more on this road you can find a couple of acceptable places.

From the train station take the bus to the airport (5 euro or more). Get off at the last stop and walk back to the road. You can either wait there on bus stop Begliano at countryside road SS14 or walk 3 km back road SS677 and till Casello Autostradale Di Redipuglia toll

There is a connection to Durrës, Albania.

If you want to sleep near the see, go near to Miamare castle. There are some flat concrete spots, where you can safely sleep. Keep close to the road so you won't be visible from the road. And be warned: the Carabinieri outpost right above you! Thus I would not recommend putting a tent, but I found it quite comfortable to sleep just on the inflated mattress there it during the summer.

The other option are hills above Trieste. Take the bus 2 and go near to Obelisco on the top. You can also take a bus 38, but you'll have to walk a little up from the last stop. There is a tap with drinkable water near the Obelisco. Go to the Obelisco, you can put a tent behind trees near the Obelisco. Also you may take dirt road that does not go up and you will find some places near the road (with nice view on the bay).