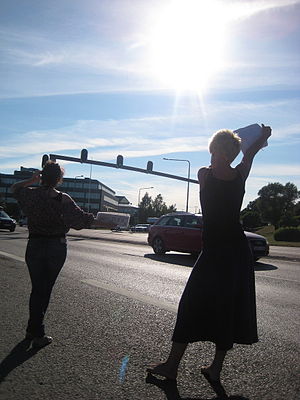 2022 : Please note that many if not all Swedish cities are operating a big change on the car accessibility to the center. The highways used to cross the cities and have been rebuilt or are being rebuilt around the city. That can make things tricky as a single highway can duplicate and "hug" a town but the configuration of the two roads' reunion can make it hard or impossible to hitchhike there and get the full trafic. A trick to solve that issue is generally remembering that most drivers use google maps / waze so you should sear for the route from you starting point and your destination on these app, then find the city where you are and see which road is indicated. This last update also means that lot of hitchhiking spots mentionned on this wiki might be outdated. Be advised. Blackratsplo : I hitchhiked from <ref>Malmö</ref> to <ref>Nordkapp</ref> in july 2022. The hardest part was to get to <ref>Stockholm</ref>. if you can do it, you'd better do it from the ferry to <ref>Helsingborg</ref>. I had a rough time getting to the capital city because after a misunderstatement I accepted a lift to 50km away from <ref>Helsingborg</ref>. Only accept rides of 80km or more, in that area and for that destination. I had to get back and hitchhike at the exit of the ferry. An elder sweddish motor biker and traveller offered to let me in an hotel with his customer card so I could get a free breakfast and just after that and a relatively long wait, a lovely Swedish man drove me to Stockholm, bought me a piece of Princess cake and hugged me for saying goodbye. These are just examples of how kind people have been to me all along the way. Be relaxed, be kind, be open minded, speak a good english and Sweden will open its arms to you. After Stockholm, it's easy street. you can easily accept 50km rides. Some people will sometimes offer you to drive you 30km further to a better spot. Kindly ask if they can let you the time to check you map and accept if that's a good option -it often is. Most drivers who stopped were Sweddish. I'd say you shouldn't fear of getting lost in the northen part of the country, as long as you have adapted food and equipment. If you're still on the big roads, even with low traffic it's so easy to get a car that you should wait and walk a bit if you want to have a little dive into the beautiful scenery. My last car to Nordkapp was in the middle of nowhere, on the main road, with 2 or 3 cars every 5 minutes. He drove me for 733km right to Nordkapp. He was a German guy. But 10min before that, I had been dropped by a Swedish father driving his two kids home. He picked me in the most remote place and took me 50km further. So don't think too much about places and nationalities. I actually regretted getting so much big rides after Stockholm as I ended crossing the whole country in 3 days and some extra hours. Making lots of 50 to 100km rides and walking 30min in between is a lot of fun and lets yyou get a real feel of what Swedish people are like. (End of Blackratsplo personnal experience.)

Hi there! I had an amazing time hitchiking (and back) to Kiruna from the Netherlands. I went via the east side up and via the west side back. I would definitely say hitching at petrol stations is a lot easier as you get to approach the Swedes, if you are polite most of them are open to listen to what you have to say, some might brush you off but as already mentioned about everyone speaks English so they won't look at you weird for that atleast! Yes thumbing also works but expect longer waiting times, I would say maximum 2 hours (eventhough I was stuck in Storuman for 6 hours with the thumb). What worked best for me is to just go from petrol to petrol and sleep in the woods next to the station if it didnt work. The more north you go the more abonded roads tend, expect a lot less traffic the more north you go. Also most petrol stations are going to be around smaller towns instead of on the road when you reach the northern part of Sweden. Especially to the west. Going the west road up is definitely more beautiful in my opinion but will take you a bit longer (a lot less trucks), but it is more chill as you can get just get dropped off at every small town because the road (E45) goes through every town and the traffic needs to slow down. So when going west you can really land in beautiful little towns next to big lake and rivers withouth even compremising your travel time!